He cracks me UP!

DS came RUNNING into the room to request a pen. This happens all the time, so I just looked to make sure he had paper and handed it over. About 5 minutes later, I walked over to redirect him to something OTHER than writing and this is what I found..... 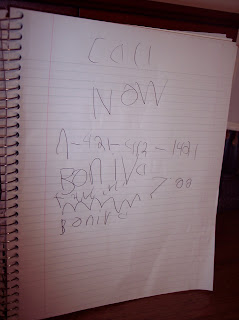 
Funny score: Off the charts!


Note to self: Don't leave the TV on something other than PBSkids when I'm not in the room. Notes for old lady pills will follow.

June 28 I wrote a list of all my concerns and things I knew DS needed to work on for the IEP.

Jen told me last week that it is time to reassess his speech goals. When she says that, I know it is my job to be on top of what I know, so we can work together in our expertise.

It has only been 4 months since I made that list.
Right there in black & white I can see his progress.

✓ Will respond to choice questions without any echolalia.
still having a hard time with the choice, but not echoing our questions!!
✓ Will request "more" without prompting consistently
✓ Will use pronouns I, me, my, you, your correctly in conversation
very much improved, still not 100%
✓ Will protest words other than "no", such as "I don't know" or "stop it"
✓ Answers/Understands Wh Questions (who,what,where)
✓ Make Observations in environment
much improved, especially with sister
✓ Respond to greetings appropriately
much less delayed, more appropriate
✓ Express/Respond to Thank you/Your Welcome/Excuse Me/I’m Sorry
✓ Asks for help from others appropriately/offer help….

The list is much longer, and there are still plenty of things that need work. But just LOOK at those improvements!

I will coin the word 'sonism': [suhn-iz-uhm] something my son says that makes me burst into laughter and be rendered useless as a parent who then determines she cannot punish him because the 'ism' was just too funny.


Example #1: DS likes to ride his scooter and park it up under the bar. Baby girl has shown him that it also doubles as a nice stool, which he can use to get into everything sitting ON the bar. It is automatic time out if you are caught standing on the scooter. So, tonight he was standing on said scooter and I had to ask him, 'What are you standing on?'
To which he responds, "The Promises, Mommy!"


Example #2:  I have been trying really hard to explain the difference between when his underwear is wet or dry. I have him touch them so that he can feel it and then we discuss. There is a LOT of potty talk around here lately. So, when he got up from nap, I asked a very normal question "what is in your underwear?". Usually the response is 'Nothing' or 'I don't know'.  Well, this particular day, I pushed him because I thought he had peed. I forgot to ask if he was wet or dry. So, when I asked, "What's in your underwear?"
He responded, "My Butt"

Is it really almost October?
[I started working on this post September 28]


DS started preschool the first week of August. His first quarter is over. Today is our first day of track out and I have both my babies and nowhere to be for the first time since June 18th (I just looked it up). We had 'happy face' pancakes (among other healthier options) for breakfast, played, and just enjoyed our day. No major meltdowns by either child or myself. Both kids are gloriously SLEEPING at the moment.... and I am writing in my PJ's at 1 o'clock in the afternoon. I do not feel bad about this at all!


It has been interesting.


For the first 4 weeks of school, each morning was a struggle to get him out of the car and into the school. I have to carry baby girl into the school too, and so when he tries to run away from me or lay on the ground instead of going in (its about a 20 yard walk) it is very hard for me to 'control' the situation. In the afternoons when I picked him up, he was sweaty, red faced, disheveled, and generally agitated. He only wanted to exit the school from one specific door. He couldn't handle if I was there before he left the playground. He refused to eat breakfast [in class] with the exception of a couple of mornings. And when I picked him up, he whined to me 'I want to go home'.


12 kids are in his class. All have an IEP - yet I do believe they are a wonderfully diverse group of kids of whom MOST challenge him socially. I believe this is the #1 reason for all the anxiety. And it's a good reason. This is the first time he has been challenged in this type of environment.


He did surprise me, though. In the past, it would take him several visits by a new therapist, etc.. before he showing ANY of his negative stereotyped behaviors or difficulties.  My prediction for school was that it would take him a couple of weeks to show anxiety and behavioral issues. It took all of ONE day. I guess 3 hours was enough.
I was told (multiple times, but mostly by his DT) as soon as he was challenged to do some things he couldn't master immediately or any sort of demand was placed on him, I would no longer be able to question the Autism and negative behaviors would ensue. That is and was and continues to be true.


I have gone from constant questioning of whether the oddities of his development were explained by autism (prior to the IEP)... to a better understanding of autism in general... to a better understanding of my son, period. I listened all too many times to the tune of 'your child isn't severe enough for services' & 'autism, you're crazy' & 'he won't always be on the spectrum' & 'he's just smart'.


Well - he is NONE of those things. He is wonderful, bright, awesome, intelligent, genius, beautiful, has autism, funny and ALSO has a future. There is no question. He is not the poster-child, especially a media born one... and there are certainly parents who deal with a lot more than we do... but I am making progress through the 5 stages of grief. I do not grieve my son. I grieve what I thought being a parent meant. It is a wonderful and horrible and eye opening experience. And it is necessary. It will eventually work it's way into my unwaivering knowledge that THIS is so much better than what I thought, but I'm not there quite yet...


Denial: believing that he would somehow jump himself right off the spectrum after we fixed him.


Anger: I'm not an angry person, so I believe this to have played out in my anger towards those who wouldn't believe me and didn't support us.


Bargaining: What therapy, what is perfect, what can I do to get him off this spectrum. What will fix it? Is it autism, is it hyperlexia, what best explains away everything? maybe it was birth trauma... maybe we're wrong... maybe if I tell no one, it'll go away...


Depression: .....for me I think manifests in my sadness when the differences between Neurotypical and ASD stare me blankly in the face. These moments come and go. I think it's normal. I think it's a process that has to happen. I don't like it.


Acceptance:  not there yet

At the same time he was pent up with anxiety from all the work at school... he was doing new things at home. During this first quarter I was happy to post quite a few successes and awesome things happening with him. There were certainly others - new words - new questions - a new level of play with his sister - some potty success... etc. And I was SO confused.


How is it that he is so ridden with anxiety after a day at school, but for the first time EVER finds the words to ask me to snuggle with him and hold him? How is he doing so BAD and so GOOD?
One call to Suzanne helped to explain. He IS learning some really important stuff at school, but it IS really hard. So, it's both. And there lies the behavioral stuff that has surfaced.


At one time I might have told you that we are just beyond PECS and a lot of intervention techniques that a lot of other kids need. But, what I have found is that there is a really fine line between being supportive and asking too much of him. So, we went back to some more basic supports.


I am still trying really hard to figure out that line most days... but we have implemented a potty PECS routine and a hand washing PECS routine in the bathroom to help him be more independent as he works through the steps. It also helps mom keep her sanity so I don't have to pick a fight over putting pants back on (or whatever it is that he decides that he's not going to do) constantly.


When the first 4 weeks of school were done, he really loosened up. He is still very challenged, but more directable. Some changes over the quarter:
Once aloof during rug-playtime (usually up staring at the room calendar) - he is now attending to parallel play for an increasing amounts of time.


He is wearing undies to school on a regular basis. He is not bowel trained in any capacity, and is fully prompted to toilet, but it's an improvement.
Much improved demeanor during school and when I pick him up. More often than not, he started telling me that he didn't want to leave school.


[fast-forward to Oct 25]
His 3 week break is over. We've completed his first week back to school. This has been the best week yet!!! I am so happy to report that he acts as if he really missed being there. He has communicated well, played well, and listened well. He does have some of that anxiety back that he didn't have (shrugging shoulders) before, but he is also challenged in his classroom again. I think it's working.

Blogs I try to read

So, Why do I write this Blog anyway?

This blog is a journal of one little boy's journey on the Autism Spectrum. My hope is to journal my thoughts, my feelings, his successes in therapy, his hilarious 'sonisms', and anything else that makes him who he is. I want to be able to remember all those small successes and make a place for someone to come and read our story. Our story will inevitably change over time.

One thing that will never change is that God is in control and made him who he is. He also made me his Mommy and entrusts in me his care.

What are you looking for?

A little boy just 3 years old
We choose to remain anonymous. I am in no way ashamed about my son's autism. I am choosing for my son to not be just a label to those who don't understand.