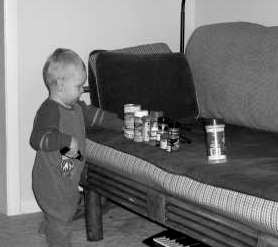 Things have been going well. We went out of town for 5 days and left the kids with some friends. DS did really well. Days 1&2 were what I like to call the 'honeymoon' phase. He was all wrapped up in his new toddler friends that he copied and laughed and played all day long. Day 3+ he started acting more like himself. I think they said he withdrew to his reading a bit more, wrote in the air/walls more, played with his hair, and such. But all-in-all, a good week. It was comforting to know that we can leave for several days and he's ok.

I was reminded this week as I cooked one of my favorite meals (Jambalaya) the first picture ever taken to record an event that would later become a concern. On that day it was funny. Ok, it was hillarious... it still is. I had no clue that other 16 month olds didn't desire to do the same thing. But it still warms my heart to see my special little boy doing what he did best.

Things are going great with Jen. I don't know if I posted this, but a while back, we had an evaluation to see what his needs had shifted to. I felt like his goals were outdated and we were a little stuck. She listened well and we've shifted directions.

For a long time we've worked on choices. It used to be the 'echolalia' that caused him to reapeat instead of choose. Then, we got him to stop repeating and thought he was making choices. Sometimes, yes. But, for whatever reason, he has regressed. It isn't a horrible regression, but he is having a really hard time making choices. He repeats the items back to you.

Before, I think it was more an echo issue, but now, I think he just sincerely has trouble picking. To get him to choose now, you basically have to say 'Do you want the green paint?' - if you say 'Do you want green, yellow, or black?' he just repeats them back to you.

We also noted that he wasn't asking questions at all. Jen had a great idea to see if he liked 'Go Fish'. And the answer is yes. It really helped him to understand what asking a question was, what it was for, etc... 'Do you have a 3?'

Since this breakthrough - he has asked a few spontaneous questions.

We also wanted to work on turn taking. Candyland was introduced & he's REALLY getting good at 'Your Turn', 'My Turn'

Last, we are working on Where. Sometimes we pull out What (What is the bear doing?), but it is harder for him. A book is a good starting place for the Where game. 'Where is the bear?' 'On the rug', 'Where is Elmo?' 'In the grass'. He is prompted to ASK the question himself as well as answer it. We do this by modeling over and over until he gets the game.

We've also incorporated a hide-n-seek game. We will hide something and he is supposed to ask where it is. The correct response is 'There it is' or 'Right there' when we pull it out.

Ron is a quirky guy. Great with DS, but I have finally learned that small talk with Ron is out of the question. Anyway, this program is going well. I think I've learned what works for DS and what doesn't. TEACCH is a very specific, very systematic process that uses a Left to Right, Finished program. DS LOVES the workjobs and they are VERY calming to him. He doesn't need a lot of extra help with transitioning from 'work' to 'play', but it does help with that as well. We will probably take away from TEACCH (which ends in 3 more sessions) the ability to take an abstract thought/process (as in 'on top/behind' or a 'toy dinosaur needs to drink water') and put it in a concrete game for a child. Then, the child ONLY has to work on this difficult task for X amount of time and they are done. It gets done just fast enough that there isn't a whole lot of opportunity for a frustration tantrum.

Suzanne has been great. She is the best one for me to bounce off and talk to. I really try to keep my chitchat to a minimum, but she is very helpful in every area. I do love DT (contrary to some previous posts) because it is encompassing of ALL areas of difficulty and really does meet DS where he is the best because it does add all elements together.

She has been working on comprehending the context of books. He loves to read, but he is just reading the words. He has really begun to understand that the pictures in the book are telling a story too, although he will only catch onto that for a minute or two before becoming frustrated because it's so hard.

She does so much it's hard to remember, but we did a lot of jumping/hopping practice this week. She is certain it is a 'motor planning' issue - not some underlying physical issue that is causing him to have a delay in certain gross motor activities. We're also going to start working on having him do some self-help skills like dressing/undressing, etc...

I think we've hit a stage with OT where I'm pulling teeth to get the right things worked on again, but she seems to listen. Mitzi wants to bring paints and fingerpaints, and sensory things all the time. When he does these activities he shows a slight aversion, and he also favors one hand (one stays on the floor while he uses the other), but for the most part the issues are mild.

However, I have concerns that he is STILL using his hands on the steps in front of him to walk up, he can't jump or hop, and he is not interested in changing clothes/helping at all. I've told her before, and today I told her that I was about to call a Physical Therapist to find out if this is the area they work in more so than OT & she perked up and said she'd bring some stuff next week, just to wait on that. I know I'm more the expert on what he needs, his changes, and who he is - but I just pray for the day that an underinformed parent doesn't get the short end of the stick just because they didn't spend 27 hours on Google.

I think his frustration due to lack of communication has greatly dissolved. He does 'use his words' on many occassions and is beginning to give us some spontaneous sentances as well.

But, he gets frustrated faster than ever if he cannot accomplish a cognitive skill or something like writing a name within a split second. He has very low tolerance for letting you help him do something he thinks he can do on his own. The tantrum begins because he can't write the letter 'G' on paper the same way it works out in the air. Due to this, I am going ahead and helping him learn how to properly write his letters. If he's going to do it, I might as well not let him learn it all wrong just because he's 'ONLY 2'.

Well, that's the LONG version of my update. Thanks for stopping by even though the posts are few and far between these days!!

Blogs I try to read

So, Why do I write this Blog anyway?

This blog is a journal of one little boy's journey on the Autism Spectrum. My hope is to journal my thoughts, my feelings, his successes in therapy, his hilarious 'sonisms', and anything else that makes him who he is. I want to be able to remember all those small successes and make a place for someone to come and read our story. Our story will inevitably change over time.

One thing that will never change is that God is in control and made him who he is. He also made me his Mommy and entrusts in me his care.

What are you looking for?

A little boy just 3 years old
We choose to remain anonymous. I am in no way ashamed about my son's autism. I am choosing for my son to not be just a label to those who don't understand.